There is really no greater joy that running through a huge flock of birds and watching them all scatter and fly away. I love it so much that I put it into a film of mine in college. Granted, it was completely unplanned and spontaneous, and they were seagulls, but it was one of the most beautiful shots in the film (that, and the shot that made it look like we were floating on water). And it’s not just with things that fly either. Chasing squirrels is perfectly fine too. As is fishing for them. But I digress. I meant this entry to be an update of my time in Paris.

I’d have to say, Paris is just like any other big global city, except everyone speaks French. So it’s harder to know when someone’s speaking badly about you. “Stupid Americans, they don’t even know how to ask for water correctly.” With my hoodie and my backpack, I have never more felt like a stupid American. Our apartment is AWESOME – it’s huge, and HAS NATURAL LIGHT (for those of you who don’t know, I love my apartment in NYC, but one thing that really bothers me is that it doesn’t get any natural light), and is big enough that I have to really motivate myself to go to the kitchen to get something to eat. There’s a boulangerie/patisserie downstairs that sadly doesn’t have Chausson aux pommes, but I’m sure I can find that at one of the other dozen patisseries on my way to the metro every morning.

Other than getting lost at the Louvre, other exciting moments include one of the most delicious dinners EVER (at Les Papilles in the Latin Quarter – when we walked in, there was a photographer from the New York Times taking pictures of the room and of our set table with meats and bread on it – for starters – there’s apparently going to be an article about the best 10 tables/rooms in Paris). We had the meat dishes for an appetizer (which included slices of sausages, including blood sausage and tuna pate, which was my favorite), then a summer soup-type thing (ok, I know all these have names, and while I may claim to be a foodie, I’m a foodie who doesn’t know proper names of foods): 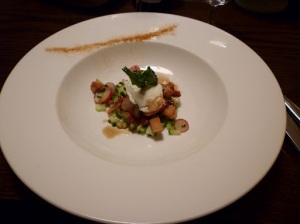 This picture is pre-soup being added. You ladled this cold broth into the bowl and mix everything up. 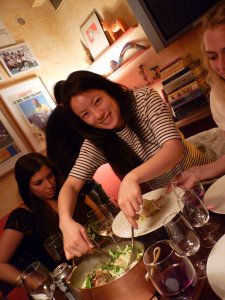 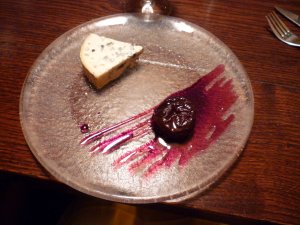 For dessert, strawberry something or other. I can’t remember what it’s called, but it’s deliciously creamy and very rich. This was actaully my favorite part of dinner. 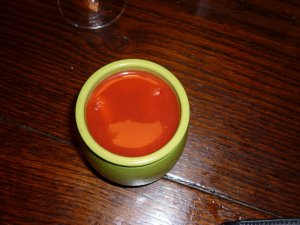 Of course, this 5-hour dinner led to none of us doing the readings for the next day, so our professor, Ben (who was also at this epic dinner), decided to show us a documentary about the Gutenberg Bible, which took most of class.

Other than that, we’ve started our final project already, which is a “dossier” on the Prosperity Gospel, which is really just a wiki page. Wiki pages are rather annoying to build and edit. There’s no easy button that says “make new page”. Instead, you have to create a link to a nonexistent page, which then becomes “orphaned”, then follow the link, which will take you to the page so you can edit it. WTF?! In any case, if you’re interested, here’s the homepage. Just click on the link below that says “Prosperity Gospel”.

All this keeps me from chasing pigeons all day.

There is a flock of sleeping pigeons (they puff themselves up and just sit there, and there are a LOT of them) on a great big piece of lawn next to the Invalides that we pass every day on our way to class. One of these days…

Posted by Cynthia Wang on June 6, 2009 in Uncategorized